Those of you familiar with the Insurancewith blog here will know that we regularly post updates on Greig Trout, an inspiring double-cancer survivor aiming to fulfil a list of 101 Things To Do When You Survive – by travelling all over the world!

Our last post followed Greig during his travels Down Under and across New Zealand (including a special visit to Hobbiton – the set of The Hobbit and Lord of the Rings films), but he soon moved on to the Asia leg of his travels, starting at Singapore. Heading to Singapore might not be something on everyone’s To Visit list, but Greig proved once again that there is something there for anyone heading to Asia. He stopped off at Sentosa Island, a small island positioned right next to the city. Here, Greig and his friend Rachael discovered the Universal Studios Theme Park. If you haven’t already. Greig recommends having a go (or two) on the Transformer’s ride here. It isn’t your average rollercoaster – you sit in a seat, a bit like a cinema, pop on some 3D glasses and experience the feeling that Decepticons and Transformers take you through various scenes.

For those not as interested in theme parks, there’s always the opportunity to visit ‘Gardens by the Bay’ – a beautiful venue which includes several different attractions. Their ‘Cloud Forest’ includes a biosphere dome which showcases a whole range of flora, displayed on a huge mountain.

As some of Greig’s family lived in Kuala Lumpar and Cambodia, now was the ideal time to pay them a visit, and #14 on the list was finally crossed off when Greig visited Angkor Wat, one of the most beautiful sights in Cambodia. 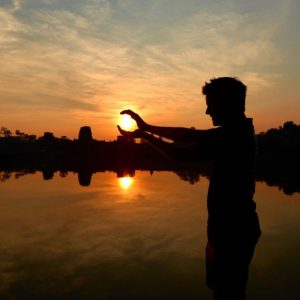 Siem Reap is growing in popularity for tourists, and after seeing Greig’s updates, it’s easy to see why! The stunning architecture which lays as a gateway to the famous Angkor Wat is the perfect backdrop to some of the best culture and friendliest residents in the world, even if us Brits can sometimes struggle with the tropical climate!

Whilst here, Greig helped volunteer with a  couple of great organisations: the Green Gecko Project, which helps keeps children off of the streets in Siem Reap, and on a farm helping tend the crops and teach children English.

Next up on Greig’s travels was China. Amongst visiting the world-famous Terracotta Army, he also travelled to four cities and like most of us would – got totally lost ordering food in Xi’an, and then cycling on top of the ancient City wall. However, one of the highlights of Greig’s visit to this beautiful country was the time he spent in the Butterfly Children’s Hospice. Founded by Lyn and Alan Gould, the hospice was built to provide palliative care to orphaned, abandoned and really sick children and infants in China. Despite the fact that children’s hospices aren’t always the cheeriest of places, Greig was surprised at how happy, bright and wonderful the hospices were. The nannies that work there tended, loved and cared for the children as though they were their own, helping hundreds of children every day.

So, after two years, twenty-three counties and around 145 blogs, Greig is back in the UK. The past two years have seen him visit some incredible places in the world and fulfil some amazing things on his anti-bucket list. We’d like to thank Greig for letting us blog about and sponsor him for his time across the world, he’s inspired us all and we wish him the best, and we’re looking forward to hearing more from him in the future.