Since we started in 2007, Insurancewith has been about doing more than just insurance. Although we are a travel insurance provider that can cover medical conditions for a reasonable price, we’ve always wanted to do that little bit more, too. That’s why we contribute £1 from every policy to the charities which help support our customers and their conditions on a day to day basis. We work closely with charities to ensure that the Insurancewith experience is the best that it can be, and we’re still learning. We have a close relationship with our customers and are always happy to answer queries on our social media pages within a matter of minutes, but it’s ensuring that you have everything you need to go away with peace of mind that’s important.

In this blog, we’ll revisit some of the people that we have provided travel insurance for over the years, who have since then become friends of Insurancewith, and how providing them with cover for allowed them to see parts of the world they may have otherwise missed out on, or travelled to without insurance.

Greig is an adventurer, a man approaching life after cancer with such gusto and also one of the most inspiring and humbling people that I’ve ever had the pleasure of meeting. Having battled not only cancer twice but also post-traumatic stress disorder (PTSD) after his treatment had finished, Greig wanted to show others who were experiencing the same things that you can still achieve what you want so he decided to travel the world, undertaking some incredible things that he’d always wanted to do. Insurancewith were one of the only companies that Greig, despite being two years clear of cancer, could get travel insurance with. 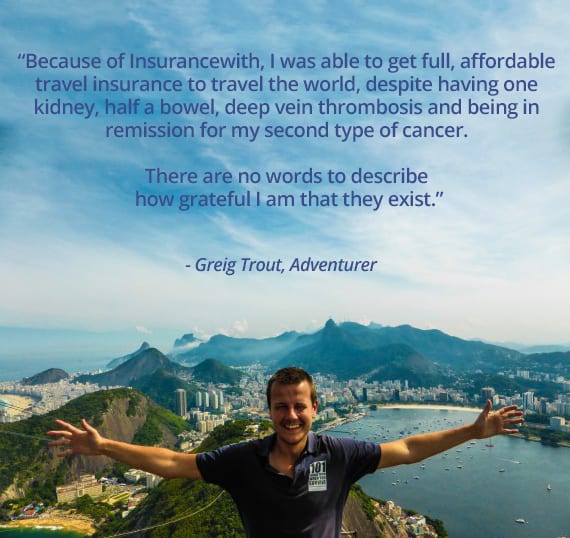 When Julie was offered quotes of £2,000 to cover her cancer for a three day trip to Santorini, she was astounded, it was more than her trip cost. A friend recommended her to Insurancewith, and she managed to get full cover for just £22.84, enabling her to go to her friend’s wedding and see one of the most beautiful parts of the world. 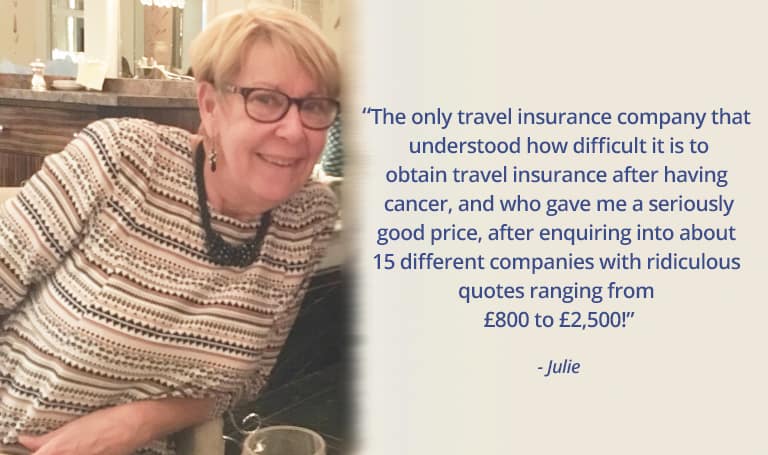 Mother-of-two Sally discovered that the vast majority of travel insurance providers asked nit-picky questions when asking customers about pre-existing health conditions before policy purchase. Depending on the medical conditions, some insurers can refuse to cover you for brain cancer, which is what Sally’s son Ben, suffered from. Ben was in remission and Sally and her husband decided that a holiday of a lifetime was in order, and friends and colleagues raised money for them to go to Disneyland. She started hunting on comparison sites for travel insurance to cover for Ben’s condition, but found only sky-high quotes and soon fear set in that she would be unable to go on the amazing trip the family had planned. 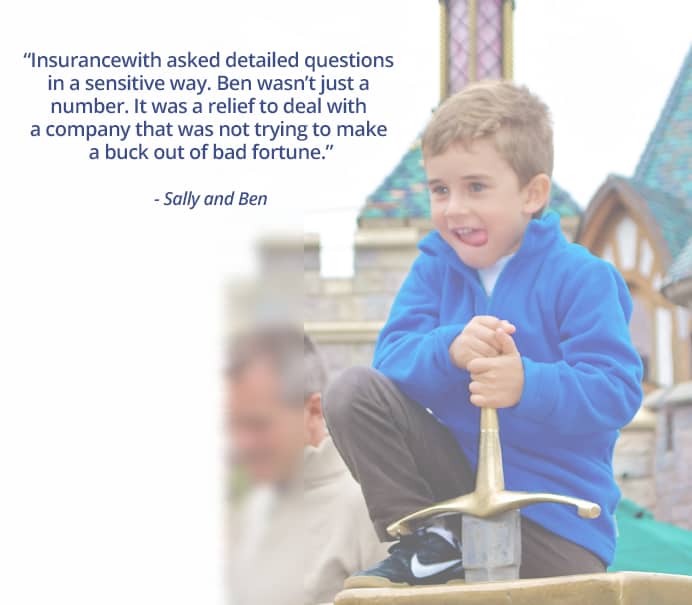 Another mother of two, Lorraine’s two young boys have cystic fibrosis. Lorraine campaigns tirelessly to raise money for the Cystic Fibrosis Trust, recently completing 50 fundraisers for her 50th birthday, including a skywalk and a skydive all in aid of helping those with the same condition as her children.

“Cystic Fibrosis is not the same in any two people – even siblings, and I should know only too well as a parent of 2 boys with CF.  Granted, some of those living with CF have far more needs than others – some need oxygen to travel – some have had transplants, or are waiting for a transplant, some have liver problems, kidney problems, diabetes, joint problems and travel with a great deals of medical equipment and medication.

Travel insurance companies have various questions they ask when quoting for a pre-existing medical condition and as soon as you mention that you or your child with CF has been in Hospital for treatment in the last 12 months, they will either not insure you or the cost rockets.

It seems to me that most travel insurance companies are living in the past – the past where treatments were not as good as they are today – where people with Cystic Fibrosis were not monitored so closely – where things like antibiotics – oral and Intravenous – were not so widely available – where nebulisers were plugged in with a hose hanging out the window which made a noise so loud you had to turn the TV up full volume to hear it! Travel Insurance Companies should do some actual research on Cystic Fibrosis and current treatments.

In July of this year I found myself in need of Travel Insurance to cover myself and my eldest son for a trip to New York in August – I’d left it to the last minute as ringing around various places for quotes did not appeal to me – endless questions to ask – some of them downright stupid!  – answering questions I hope I never have to say yes to and then getting a figure at the end which is way over budget set aside for insurance.

They do ask a few more questions for the Insurancewith Quote, which I was happy to answer, and was even happier with the £81.50 quote, which I took out straight away – this price covered Dan for Cystic Fibrosis and me, with no pre-existing medical conditions.  No hassle, no awkward questions – just yes, no answers.

At Insurancewith, we try to help as many as people find travel insurance cover for their trip. Maybe you could be the next customer to have that peace of mind for their holiday! Get a quote here.